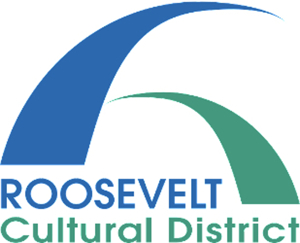 The Roosevelt Cultural District is a certified historic district comprised of a shopping center with the Des Moines Community Playhouse as the cultural hub. Built in 1933, the Roosevelt Shopping Center was the first true shopping center in the state of Iowa. Originally built to house several businesses, the one square mile area has grown and thrived into a cultural landmark that reminds visitors of Des Moines at its finest. It became a state certified historic district and obtained their 501c3 status in 2005. Along with restaurants, shopping, and entertainment, Hubbell Elementary School and Theodore Roosevelt High School round out the educational side of the district. The Roosevelt Cultural District recently completed a new streetscape project, is pedestrian-friendly, and perfect for community gatherings and cultural events.

The Des Moines Community Playhouse is a highlight of the Roosevelt Cultural District recently completing over 8 million in improvements and renovations to the theatre. The Playhouse remains one of the largest subscriptions performing arts organization in Iowa with 3,500 members. More than 55,000 people attend an average of 12 productions each season, produced by a professional staff of 10 plus more than 1,400 volunteers. The Playhouse education department serves more than 30,000 people annually and consists of a year-round program of classes and camps. With over 100 years of uninterrupted service, the Playhouse is among the six oldest and second largest continuously-operating community theatres in the U.S.